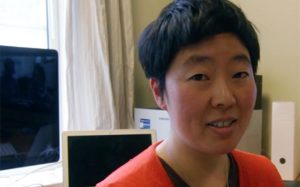 Film director Christine Cynn has worked for 20 years to document the human imagination, particularly in the context of extreme political violence, such as the 1965 Indonesian genocide. Cynn co-directed ‘The Act of Killing’, which used fiction filmmaking as a tool for understanding how mass murderers imagined themselves and documented how ‘playing yourself’ can be transformative. Building on the blend of observation and dramatisation developed in ‘The Act of Killing’, Cynn now draws a wider frame around the fractured realities and real-life performances that constitute a global war machine.

From the Director, Christine Cynn: “There are times when one chooses to make a film. Other times, the film chooses you. A chance meeting leads to an impulse and, camera in hand, I find myself caught inside a superphenomenal vortex. So it happened with ‘Shooting Ourselves.’ After immersing  myself for years in the performative politics of mass-murder in one small region of Indonesia for ‘The Act of Killing’, I knew how rare it is for so many people from so many conflicts to come together to re-enact parts of their lives.

Gathered by Berlin theatre legends Rimini Protokoll, the protagonists of ‘Situation Rooms’ were strangers in a strange place. Never met before. Unlikely to meet again. ‘Situation Rooms’ was a new type of time capsule and the protagonists arrived to deposit little pieces of their lives in each room. Kinshasa here. Israel here. Waziristan. Zurich. Kashmir. Homs. Worlds within a world, folded into a two-storey building. Our camera was one amongst a swarm of mechanical eyes, each recording from a singular perspective. Everyone is filming everything. The iPad shots are shaky and imperfect artefacts of humans in motion. Paths cross. I shoot you. You shoot me.

Does Situation Rooms propose a new form of democratic vision combining theatre and technology? Riding the U-bahn after late nights on the set, little screens glow in every hand, just like inside the ‘Situation Rooms’ set. I feel a wave of ambivalence. Can we see ourselves better through these small screens? Can self-documentation in this form lead us to self-realisation? Can magic mirrors which capture and transmit our faces, help us to see what we prefer not to see, the banal visage of institutionalised self-destruction? Do we risk adding to the fog of war?

My fascination with performance and ambivalence about the magic of technology, made me want to see and document the unscripted interactions and moments on set, to experience what it was like to really be in the room with each protagonist. Most of all, I wanted to be in the room when they all came together as a surreal family that would be fixed in those iPad films and in that space forever. Like any real family, togetherness means friction, awkward silence. Then something real, something without name, might pass between people and begin to grow. The cliché of the phrase “our common humanity” does not negate the simple and powerful feeling of sitting in a room with other humans, the physical reality of sharing space, exchanging glances in mutual recognition of the emergence of “we”, followed by “can”, “feel”, “become”. A joke, the weather, milk for your coffee—these soften the edge of our anxieties, ease our perpetual loneliness.

‘Shooting Ourselves’ does not express my attitude about the arms trade and armed warfare, so much as my desire to know the people who make war and who are, in turn, made by war. In making the film, my experience is one of near-hope.The film proposes a potential for hope in our fragility and curiosity, in our capacity to sideline our fears, even while reflecting upon our darkest acts and most foolish conceits.”